Bystanders are those who witness injustice and do or say nothing.  Doing or saying nothing sends a message that injustice is acceptable.

It isn’t! Be an Upstander.

An Upstander is someone who: 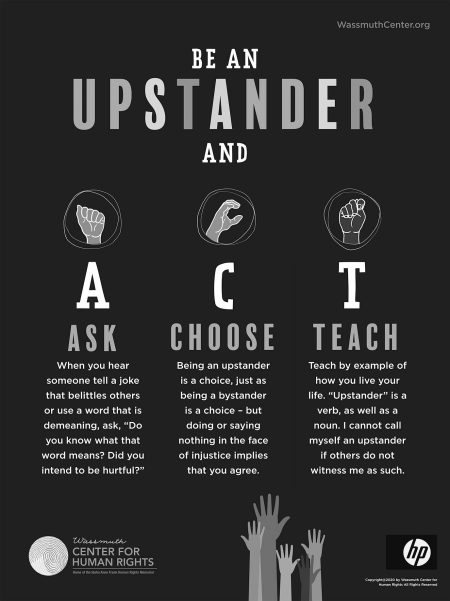 Be an Upstander and A.C.T.

A = ASK: When you hear someone tell a joke that belittles others or use a word that is demeaning, ask, “Do you know what that word means?  Did you intend to be hurtful?”

T = TEACH: Teach by example of how you live your life. “Upstander” is a verb, as well as a noun.  I cannot call myself an upstander if others do not witness me as such.

Upstanders are those who recognize a wrong and take action to make it right.

Designed to support classroom instruction in grades 5-12, the Upstander Toolkit includes educational resources and materials produced by the Wassmuth Center for Human Rights to foster a school culture that respects human dignity and diversity.  The Toolkit includes a lesson plan with handouts that integrates the “Be an Upstander” video and downloadable student pocket-size brochure, to be reinforced with the “Be an Upstander and A.C.T.” classroom poster and student “I am an Upstander” notebook rulers.  For more information or to order an Upstander Toolkit, please submit the request form.