The book selection is A Train in Winter:  An Extraordinary Story of Women, Friendship and Resistance in Occupied France by Caroline Moorehead 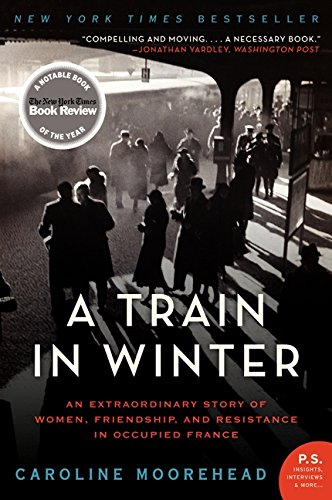 The New York Times bestseller, now available in paperback—the riveting and little-known story of a group of female members of the French resistance who were deported together to Auschwitz, a remarkable number of whom survived.

In January 1943, 230 women of the French Resistance were sent to the death camps by the Nazis who had invaded and occupied their country. This is their story, told in full for the first time—a searing and unforgettable chronicle of terror, courage, defiance, survival, and the power of friendship. Caroline Moorehead, a distinguished biographer, human rights journalist, and the author of Dancing to the Precipice and Human Cargo, brings to life an extraordinary story that readers of Mitchell Zuckoff’s Lost in Shangri-La, Erik Larson’s In the Garden of Beasts, and Laura Hillenbrand’s Unbroken will find an essential addition to our retelling of the history of World War II—a riveting, rediscovered story of courageous women who sacrificed everything to combat the march of evil across the world.